Get fresh music recommendations delivered to your inbox every Friday.

Stand On Your Head 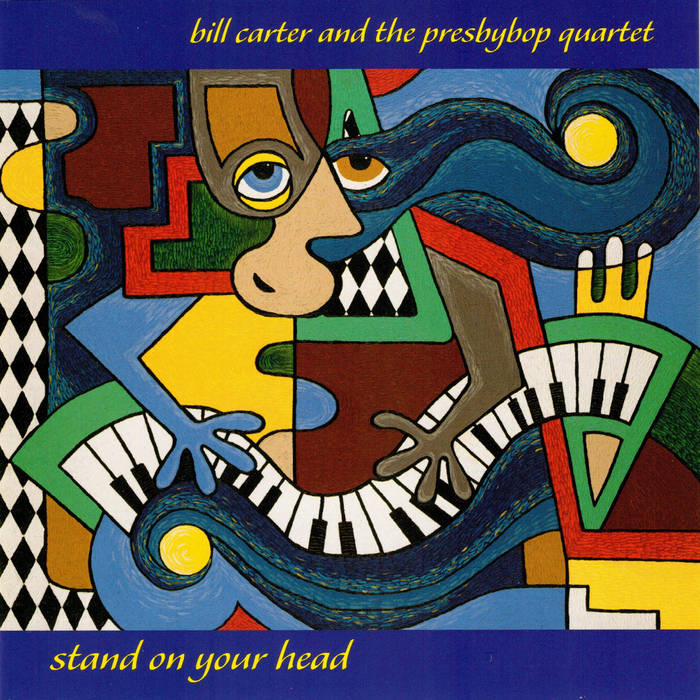 STEPHEN KOLDERUP Bill Carter and Presbybop music have outdone themselves! I am listening on a gray day and basking in the sunshine of their artistry!

From the liner notes by George Graham:

It's a somewhat sad economic fact of life than many jazz musicians, including some of the musically gifted and influential, regularly have to work a "day job" earn a decent living in the fickle world of the music business. Occupations range from truck driver (many) to sign painter (Tal Farlow) to psychiatrist (Denny Zietlin). Pianist and composer Bill Carter is in the enviable position of loving his day job. The pastor of the First Presbyterian Church of Clarks Summit, PA, Rev. Carter sees jazz and his pastoral work as parts of a whole -- two facets of raising people's spirits.

Smitten by jazz at an early age, the graduate of the State University of New York at Binghamton and Princeton Theological Seminary followed a path that never saw him far from his beloved jazz, while he pursued his spiritual calling. The latter has also led to five published books of sermons, and national radio audiences.

A versatile and tasteful pianist, able to move easily among various jazz styles, Carter especially shows his strength as a composer on this, his fourth CD. Using a wide variety of jazz styles as starting points, Carter creates ten appealing compositions (and a fascinating arrangement of a familiar tune) that span Monk to funk, ballads to bossa, cool-school (Horace) Silver to blues, with the appealing melodic lines that are often shortchanged in many pure jazz compositions, along with the harmonic heft that gives his redoubtable colleagues plenty of grist for their improvisational prowess.

In that group are reed man Al Hamme, based at SUNY Binghamton for 30 years on the jazz faculty, and a veteran of a long association with legendary bassist Slam Stewart, as well as recordings with Phil Woods, Tom Harrell, Bucky Pizzarelli, and the New York Woodwind Quintet, along with his own Swing Street Jazztet. Hamme was also one of Carter's teachers.

Bassist Tony Marino, based in the Pennsylvania Poconos, is a busy and peripatetic artist who is part of the Grammy-nominated David Liebman Group, as well as the bassist of choice for Broadway star Betty Buckley. Equally at home in the intricacies of Liebman's music, straight bop or fusion, Marino is a much-in-demand player, not only for his rich, solid low-end work, but for his impressive soloing.

Tennessee-bred drummer Tom Whaley is best known for his work with pianist and lyrical-wit Mose Allison, and has toured internationally with Carmen McRae. Also based in the Poconos, Whaley is known for his distinctive combination of versatility, energy and sensitivity, all of which are shown on this CD.

Joining the Presbybop Quartet for this session are trumpet man Jeff Stockham, a rising light from Upstate New York who is equally at home on mellow flugelhorn as well as hot bop trumpet solos. Sax man Mike Carbone rounds out the group on four of the tracks, not only filling out the ensemble to a kind of West-Coast Cool texture, but contributing his share to "Stand on Your Head's" inventory of worthy solos.

While Carter's previous releases have combined his callings, the quality of the music was never sacrificed. "Stand on Your Head" is his first straight-out (secular) jazz release. But I'm sure he would feel as if he had done his job if jazz fans found some inspiration in the music -- the creative musical inspiration is certainly there -- and if the faithful swung.

Presbybop Music is a musical venture of Bill Carter, jazz pianist and Presbyterian minister. After years of pretending to split the life of faith from the music of jazz, Bill has been trying to find links between the two halves of his brain. Presbybop Music is his attempt to integrate his strong Presbyterian faith with the rhythms of bebop. ... more

Bandcamp Daily  your guide to the world of Bandcamp

Nightmares on Wax and Bremer McCoy stop by with their sublime new LPs.